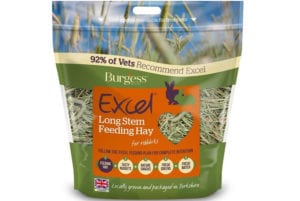 Did you know that rabbits need different types of hay to sleep on and to eat? We all know that rabbits are herbivores – but at Burgess they like to term rabbits ‘fibrevores’ because this highlights the fact that fibre is what ensures nose to tail health. Forget five a day, think fibre a day!

While grass and herb based foods, such as Burgess Excel Nuggets and Burgess Nature’s Blend, will provide a good portion of your rabbit’s fibre needs, grass is what they would naturally nibble all day long in the wild. Providing enough fresh grass every day to meet your rabbit’s needs is difficult, hay has just the same health and digestive benefits as fresh grass – but is much easier to store.

In fact, studies have shown that “Feeding Hay” should make up to 85-90 per cent of your rabbit’s daily diet, that’s around 1kg of hay per week, to maintain a healthy gut and weight and keep teeth healthy. However research has shown that the majority of rabbits are not fed the correct hay, and instead are forced to chew on bedding hay, which, while comfortable to sleep on, is often unpalatable and has an unknown nutritional value.

So what’s the alternative? Feeding hay such as “Timothy Hay” is in rich in fibre and low in sugar so it’s fantastic for gut health, playful foraging and enrichment, and, because the rabbit eats it by grinding back and forth, it also works to wear down teeth, improving dental health.

As leaders in small animal nutrition, Burgess have developed their unique British-grown Burgess Excel Long Stem Feeding Hay which we like to think of it as a new fragrant “superfood” for rabbits!

Exclusively grown for feeding, every step of the harvesting process is designed to keep the hay as dry, fresh and green as possible. The crop is turned several times a day, machine dried and stored in dark, closed barns – with the whole process from field to pack taking just 48 hours. In fact, it’s so good; it’s even used to feed racehorses.

Ensure your rabbits are given enough every day (roughly as large as ta rabbits, and for each of the rabbits you own) and alongside our Excel Feeding Plan of tasty nuggets, natural snacks, fresh greens and fresh water, your bunnies will be blooming!